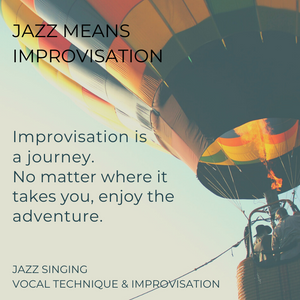 Throughout its recent history, evolution, and contemporary route, jazz music has been identified with improvisation. One point in which jazz differentiates against other musical idioms (that also share the element of improvisation) is that improvisation in jazz is not a static “snapshot” nor is a purpose. We could say that improvisation is the very language of jazz.

The jazz musician deals with a musical piece, that constitutes the “medium”, which he/she uses as a motivation in order to express himself/herself, to expand his/her boundaries and imagination, to take risks, to be creative, and of course to get into a musical conversation with the other musicians.

One could compare this situation to the performance of a rope walker, who keeps his balance, has been practicing with discipline on the technique but is not able to predict what exactly is gonna happen on that rope, during the show!

The musical score (usually a jazz standard) is a kind of “canvas”, on which the musician will almost recompose its components (phrasing the theme, reviewing its harmony, improvising its melody, changing its time signature, etc), will interact with the rest of the group and will improvise, having mastered the piece’s form, while respecting its current arrangement, style, and context.

As with every other instrument, the voice shares the same field of action. The jazz singer must always be alert, being able to rhythmically move with freedom within the form of a piece (phrasing the theme), changing-improvising the melody, having the ears wide open while keeping a constant conversation with the other musicians and improvise with imagination and inventiveness, taking the musical context and style of the piece, always into consideration.

In jazz singing, the voice is a musical instrument. And in jazz music, the significance lies also on the “how”… not only on “what”.

Jazz is a common universal language, that throughout its history has proven its power to evolve, to bring musicians together (who have the unique ability to play and communicate musically, without even knowing each other beforehand!) and of course to unite cultures from every part of the planet, under the inspirational drive of continuous artistic creation.