Improvisation "from the cradle" 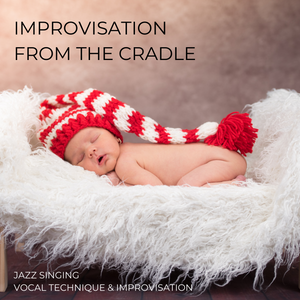 It is a quite common belief, that improvising in jazz music is something that requires knowledge, maturity, experience, aesthetics, etc. That’s the truth and this assumption is absolutely correct. Nevertheless, I would like to get straight to the topic of this article and explain what I mean by the title “Improvisation from the cradle”.

According to modern pedagogical science, any field of knowledge is actually “owned” by someone (of any age) solely by the route of direct experience. The theoretical training is certainly necessary, but never enough to fulfill or replace the actual experience. Such is the case with improvisation in jazz music. The student gets in touch (in theory first) with the various tools, rules, with the "vocabulary" (depending on the style of jazz he/she studies, per case) and so with these first supplies, he/she can start the magical journey into improvisation. Of course, it would be absolutely desirable if literally from the cradle, children could get in touch with improvisation (starting from their early musical education), because they would manage to place the foundations of creativity, expressiveness, good taste, self-awareness and thus they would succeed a deeper contact with their inner self.

Accordingly, as a person from an early age begins to experiment and to interact with the surrounding environment – it is common knowledge that since children feel free in their play and in their song, they get to constantly "improvise" – in the same sense, anyone who wants to play jazz would benefit greatly if their attempts to improvise would be encouraged from the beginning of their studies. Obviously, the first attempts would be unformed, non-artistic, and without clear direction, but gradually with the assistance of their studies, by having the ears wide open, by developing and deepening into the art and technique of improvisation, the results could possibly be spectacular.

Improvisation in music (in any genre) presupposes the freedom of expression and the true will of the musician to tell his/her own story, a spontaneous and not premeditated story, which as the “plot” develops, this same story is opening new and unexpected perspectives on where it could be directed, each time. Someone who wants to be a writer starts writing no matter how “unripe” his early writings may be. An apprentice painter is painting the first strokes, even though the technique of freehand drawing is not mastered yet.

Freedom of spirit, expressiveness, imagination, and musicality are inherent elements. If they are not suppressed and “injured” by social – psychological factors, then they represent the basic raw material of the musician. This raw material, which in the meantime is being increasingly cultivated, will very soon meet the framework, within which it can be combined with the knowledge, technique, and all the other “tools”, that the musician will be taught in the theoretical – academic level, in order to finally achieve the musical result, which will have artistic, aesthetic value and a reason of existence.

One more conclusion is emerging from the above thoughts and I’ll take the opportunity to place it here as it constitutes my strong personal belief. Every form of art has two aspects, the technical and the artistic one. None of these two should take precedence over the other, though. Instead, they must work together harmoniously from the very beginning as a wholeness, because only then, the ultimate carrier (the musician, writer, or the artist in general) will be balanced and only then the final product of his/her art will be profound, meaningful and will manage to reach the human soul as its grateful recipient.