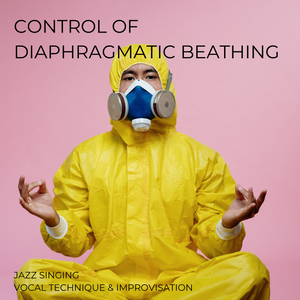 The first and most important chapter, regarding the "opening" of the vocal sound, is breathing. The great importance of breathing in singing, as in any other wind instrument, is absolutely understandable. It is even more important though, to realize the great value of diaphragmatic breathing in comparison to "short" (shallow) breathing.

Diaphragmatic (deep) breathing is a natural process of the human body and its indisputable benefits can be found in any research on the subject. Despite all that, people rarely use it in their daily life, except for some cases such as during their sleep, when the body is totally relaxed. Most people adopt a "short" and shallow respiration, which does not oxygenate their body efficiently and is not helpful during the singing procedure.

What's most important to keep in mind is that the air inhaled in order to sing is not different in quantity from the air we need for our natural respiration. The inhalation of a larger amount of air may have opposite results and negative consequences, regarding the natural function of breathing while singing and the procedure of support and controlling the airflow.

So it's quite obvious that breathing-supporting is one of the three elements that constantly interact with each other, in order to achieve the most "open" and free vocal sound: